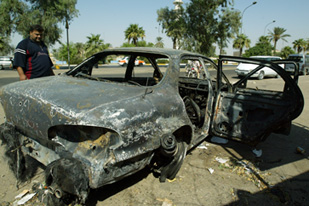 The release of five Blackwater mercenaries, who killed 17 civilians in Baghdad on legal technicalities is deeply offensive.

What rubs salt into the wounds is the presiding judge Ricardo Urbina, commented that the mercenaries rights’ had been violated.

The five mercenaries, Donald Ball, Dustin Heard, Evan Liberty, Nick Slatten and Paul Slough, all formerly in the US military, had been charged with manslaughter and weapons charges, which carried mandatory 30-year prison terms.

Blackwater have since rebranded and now call themselves XE (pronounced Ze) Services LLC.

The rebranding exercise was enough to convince the US government to renew Blackwater’s contract in Iraq.

The Nation reported that a former Blackwater employee and an ex-US Marine who had worked as a security operative for the company, claimed that the company’s owner, Erik Prince, may have murdered or facilitated the murder of individuals who were cooperating with federal authorities investigating the company.

“views himself as a Christian crusader tasked with eliminating Muslims and the Islamic faith from the globe and that Prince’s companies encouraged and rewarded the destruction of Iraqi life.”

To that end, Mr. Prince intentionally deployed to Iraq certain men who shared his vision of Christian supremacy, knowing and wanting these men to take every available opportunity to murder Iraqis. Many of these men used call signs based on the Knights of the Templar, the warriors who fought the Crusades.

XE Services LLC are nothing but satan’s mercenaries, if you are not aware of the role being played by mercenaries in Iraq & Afghanistan, watch the following:

Big media will never openly call these devils mercenaries, no, they will use acceptable language such as “Private Military Contractors” or in security jargon, “PMC’s”, or “Security Personnel”.

No Justice No Peace.

2 responses to “All Charges Dropped Against Trigger Happy Blackwater Mercenaries”