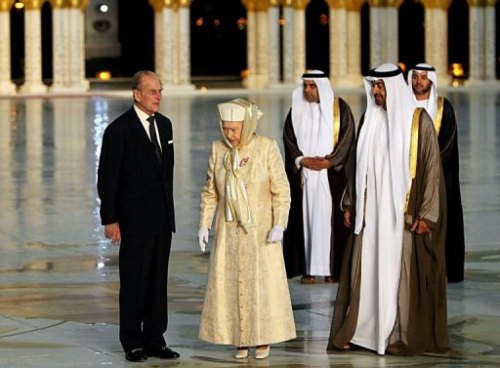 The Queen decked out in a hijab visited the Sheikh Zayed Grand Mosque in Abu Dhabi yesterday.

The 84-year-old queen adjusted the scarf worn over her white hat as she made her way into the prayer hall where, at the door, she was escorted to a covered corner to remove her shoes – a tradition followed by Muslims upon their entrance to mosques.

Inside the mosque, which opened in 2007, the queen listened to children reciting the Koran.

“This visit by the Head of the Church of England to the Sheikh Zayed Grand Mosque is reflective of the multi-faith dialogue and tolerance that is common to both the UAE and UK,” the British embassy said.

“There is a very deep friendship between Her Majesty and the ruling families here.

The relation we have now is based on a common perception of our political interests, a shared analysis of threats and very close business and investment links between our two countries.

This visit is about looking into the future.”

No sooner had that been said, the Gulf’s flag-carrier Qatar Airways were mulling over a new order for more A380 superjumbo jets.

The Telegraph reported on Foreign Secretary William Hague’s decision to reach out to Gulf states in an effort to secure better diplomatic and trade ties meant Britain had to “take on board” Arab foreign policy goals.

Requesting better ties would be a two-way street, not just plea for more defence contracts and exports, they said.

“It will be a six lane highway with movement in both directions,” said one diplomat. “We have to respond to what Gulf States want. If we want a long-term partnership on foreign policy, then changes in our stance have to be part of it.”

But the visit has taken on a more significant, and unusually political context both with the change of government in Britain and increasing tensions with Iran a short distance away on the other side of the Gulf.

Mr Hague set improving relations with the Gulf and India as his first policy goals, and both David Cameron, the prime minister, and Liam Fox, the defence secretary, visited Abu Dhabi within a month of taking office.

That may mean yet further withdrawal of traditional British support for Israel, with criticism of its government already more marked under Mr Hague than it was under New Labour government.

In another indication of the Foreign Office’s new sensitivity to Arab opinion, officials admitted to The Daily Telegraph that policies on the Israel-Lebanon war of 2006, Israel’s invasion of Gaza in 2008-9, and its occupation of the West Bank and settlements policy were “motivators” for the Islamic radicalism that they confronted daily in the Gulf.

The Israeli’s were not pleased to hear this news.

One response to “Queen Wears Hijab On Abu Dhabi Visit – Shift In Foreign Policy Or Desperation To Sell Weapon Contracts?”