Last night, I attended the England V Romania U21 Football match & as I neared the stadium, I saw the above banner unequivocally stating to “kick Israeli racism out of UEFA!”

After stopping and speaking to the chaps stood out in the freezing rain – handing out leaflets and stating their position – I was pleasantly surprised to see that this grass roots movement is beginning to take hold within the public conciousness.

One of my fellow bloggers – http://abdelxyz.wordpress.com – (who you should be following!) has been writing on this issue for some time now:

More than twenty years after the spectre of apartheid was finally ended in South Africa, the very same system of state-sanctioned discrimination is alive and well in Israel today.

The Apartheid State of Israel discriminates against Palestinians in every walk of life, including sport.

The world of sport cannot be divorced from other aspects of life and the standards deemed acceptable by sporting bodies, sends very powerful signals to the public.

Since Israel was announced as host there have been a number of calls to boycott the tournament or for UEFA President Michel Platini to reverse his decision.

One well-known petition is organised by the Palestine Solidarity Campaign.

In the text of the petition it reminds Platini that “Hosting an international sporting competition is an honour. However, there is nothing honourable about the actions of Israel towards the Palestinian people. Your damaging decision sends the message that UEFA has no issue with the illegal and discriminatory treatment of Israel towards the Palestinian people.”

Perhaps Platini granted Israel the opportunity because Israel is a benevolent host – just ask the Ethiopian Jews who live there.

Prominent Israeli politicians join street demonstrations shouting ‘Blacks out’ and refer to Blacks in Israel as ‘cancers’ and ‘infiltrators’.

You all know that the leader of the free world, Barack Obama has gone to Israel to re-affirm his loyalty to the terrorist state (what do you think the millions of shekels in campaign donations buy?) THAT speech in Cairo seems like an awfully long time ago.

The Palestinian people are patient, but the patience is beginning to wear thin, the following a message pinned to a tent, on the ruins of a house bombed by the Israeli’s in one of their all too frequent attacks:

And you know all too well what happens to the Palestinian Ghandi’s who protest peacefully:

“I have a dream” – not if you’re in the only democracy in the Middle East!

Remember to play your part – The world must rise against Israeli apartheid give zionism the red card! 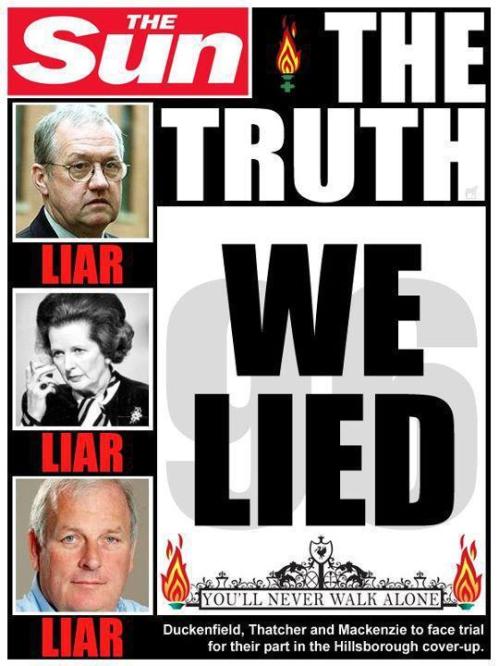 It’s taken 23 long hard years for the families of the 96 that died at Hillsborough to get a glimpse of justice, 23 long years of successive British governments lying and colluding with a corrupt police force and media, finally yesterday the truth was revealed and the mass cover up exposed.

A couple of years ago I blogged on the ongoing “Justice for the 96” campaign started by Liverpool Football Club supporters and how Rupert Murdoch’s The Scum newspaper deliberately lied and how that web of lies was upheld by one of Murdoch’s key lieutenants – Kelvin McKenzie.

Today’s front page of The Scum newspaper sadly doesn’t look like the one above, in reality it looks like:

It’s been proved that there certainly was a conspiracy to ensure that the truth of Hillsborough would be covered up, my original post came well before Rupert Murdoch was shown to have the British political elite in his back pocket.

It’s no conspiracy theory to state that Rupert Murdoch has a pervasive and damaging effect on British democracy through his ownership of printed & television media channels.

If it’s not Rupert Murdoch, then it’s his zionist cohort Richard “the pornographer” Desmond who also has an equally troubling choke hold on British mainstream media.

Once in control of the media, the ideological warfare begins. This shows how the right wing zionist media owned by the likes of Rupert Murdoch & Richard Desmond promote the hatred of Muslims and Islam to sell newspapers.

I suppose it would be one conspiracy too many to suggest that Sean Hoare the News Of The World whistle blower was murdered because he knew too much?

I suppose it would be one conspiracy too many to suggest that our British government is the true enemy of free speech and a well and truly free press that is free to criticise?

You can be Rupert Murdoch at the head of a media corporation which stands accused of rampaging through practically every law in the book and yet you are deemed to be a fit and proper person to operate a television station in London.

But report anything that contravenes the pro war actions of the government run media and there’s hell to pay!

When it comes to events such as Hillsborough, the London Tube bombings, the Lockerbie bombing can we trust the police and justice system?

‘The retired officer – of assistant chief constable rank or higher – has testified that the CIA planted the tiny fragment of circuit board crucial in convicting a Libyan for the 1989 mass murder of 270 people.’

Mark Duggan, the Tottenham man who was executed by the police, who’s murder sparked last year’s riots was said to have had a gun, there have been multiple claims against the police during the IPCC investigation for planting a gun at the scene to cover up for their own crime.

In a world that has been flooded by news, there is usually nothing that rises far above the smouldering lava of sensation — that which consumes all truth and absorbs all lies mixing them into a fiery lake or stew of bubbling nonsense. So much so, that to discover glanced over facts, to question people of importance within government or the machine itself leads to the branding of one as a “conspiracy theorist.”

Not all people who doubt the official version of the story are raving lunatics.

Some, like myself, have an honest distrust of their own government.

This is the legacy left by lying politicians and an untrustworthy media machine.

The bigoted French Football Association decided that there should be a racial quota for it’s football clubs, with “Blacks & Arabs” being capped at 30% of the total of all professional footballers.

The French establishment have a huge problem with racism, when they’re not arresting women from wearing the hijab, they have a problem with a huge chunk of their population, because, the trouble is all these uppity blacks and muzlims have no respect for cheese and wine French culture and slowly they are eroding everything the great French nation stands for dammit….take your pick, Sarkozy, Kouchner, Le’ Pen…they all have variants of this same spin.

The World Cup triumph of the French national team in 1998, and the projection of Zinedine Zidane – son to Algerian immigrants and raised in the ‘banlieues’ of Marseille – onto the Arc de Triomphe was supposed to represent the multi-cultural French ideal.

But the problems in France’s urban suburbs didn’t go away and the French have no tolerance towards minorities.

The issue also goes back to the French team’s mutiny to train at the World Cup finals last summer. The fiasco was privately blamed by some on the black and Muslim players in the squad, and speculation was rife that the team fragmented due to a lack of “national identity”.

Of the 30 players most regularly chosen for the 2010 World Cup until now, the following 22 are either Black or Arab:

So when MediaPart revealed the transcript of a high-level, closed-door meeting when the quotas were debated;

National technical director François Blaquart: “We could trace, on a non-spoken basis, a sort of quota. But it must not be said. It stays as action only.”

U21 year-olds Espoirs team coach Erick Mombaerts: “There are clubs like Lyon who do it in their training academies. They do it systematically.[…] they can’t stand it anymore.”

One of the first measures taken by Blanc – a World Cup winner from 1998 – when he became coach of the French team last summer was to stop the team policy of eating only halal meat.

Apparently in France, counting people by race or ethnic origin – even for census purposes or for statistics research – is banned, a state which, in theory, is blind to race or religion.

The notion of quotas is fundamentally anti-republican.

The Akh would like to remind the Napoleon complex addled French, that their bigoted, Islamophobic agenda needs to be checked, apartheid is dead, everywhere except Israel that is, and if it wasn’t for us Blacks and Muslims who rebuilt your battered countries after the second world war and worked like slaves to build your economies while you slaughtered us in Algeria, we are here, and we’re not going anywhere.

For a country that was founded on a riot, you better know that these aren’t the slave days and there’s only so much you can push people before they push back.

Are Footballers Really That Dumb?

Rightly or wrongly, footballers have become icons and role models for a whole generation of children, and sadly adults alike.

Let’s compare & contrast, the idiot above is one Mario Balotelli, when he’s not struggling to put his bib on, he’s getting sent off, crashing one of his cars, sneaking into women’s prisons and calling rival fans out to a fight , great role model for us all to aspire to.

But for every ten Balotelli’s, you get one Omar “Fredi” Kanoute.

The man who gave over €300,000 (£260,000) to prevent a local mosque from closing and played with masking tape over the 888 on his Sevilla shirt because he did not want to advertise a bookmaker, as well as the gesture of solidarity with his fellow Muslims in Palestine that landed him a hefty censure and fine.

Unfortunately with the money in today’s game, today’s idiot footballers will produce tomorrow’s middle classes, a shuddering thought if there ever was one.

The Palestinian national football team took on Thailand in Ramallah on Wednesday, in the first competitive game to be held on Palestinian soil for more than 50 years.

Despite the result on the night, The Football Palestine blog points out that the game was attended by AFC President Muhammad Bin Hamam who is the key man in deciding whether Palestine will be able to play their home games on Palestinian soil.

The positives of the game were that Palestine did not back down. The crowd got behind them and they really put Thailand on the back foot.

The goal from Abu Habeeb was fantastic and he is one to watch for in the future. Khaled Jamal’s energetic performance deserved a goal, he held up play very well.

Individually, you can’t really pick out a player who underachieved.

Ramzan Kadyrov continues to cement his rule in Chechnya, this time by inviting the Brazil football team to play his own Chechnya.

Whilst peace & prosperity has been a long time coming in the area, The Akh can’t help but wondering how long it will last, considering Kadyrov is Moscow’s chosen strong arm dictator.

Chechnya is one of those places that The Akh would like to visit, a place of immense natural beauty, off the beaten track, halal food and Masajids to pray in and perhaps even taking in a game of football whilst there.

Grozny, during the brutal Russian invasion.

If there’s no football on, The Akh may get in on some bride snatching action, apparently it’s all the rage in Chechnya.

Gennaro Gattuso Attacks Joe Jordan, But Who Would Win In A Fight?

The funniest thing is that there have been few more fearsome sights in the European game than Joe ‘Jaws’ Jordan without his front teeth.

In fact Joe was voted in at the 34th hardest footballer of all time.

So who would win in a street fight?

I reckon Jordan would go all Clint Eastwood on him, like in the clip from Gran Torino.

Age and treachery will always overcome youth and skill.