Leading fundamentalist rabbis gather in Israel to defend the publication of a book, Torat Ha’Melech, that attempted to provide halakhic justification for the killing of non-Jews, including innocent children and families.

The gathering exposed not only the ferocious racism of a swath of Israel’s pro-settlement rabbinate, but the powerlessness of the government to stop a bunch of genocidal theocrats.

As soon as it was published late last year, Torat Ha’Melech sparked a national uproar. The controversy began when an Israeli tabloid panned the book’s contents as “230 pages on the laws concerning the killing of non-Jews, a kind of guidebook for anyone who ponders the question of if and when it is permissible to take the life of a non-Jew.”

According to the book’s author, Rabbi Yitzhak Shapira, “Non-Jews are “uncompassionate by nature” and should be killed in order to “curb their evil inclinations.” “If we kill a gentile who has has violated one of the seven commandments… there is nothing wrong with the murder,” Shapira insisted. Citing Jewish law as his source (or at least a very selective interpretation of it) he declared: “There is justification for killing babies if it is clear that they will grow up to harm us, and in such a situation they may be harmed deliberately, and not only during combat with adults.”

More Israelis die from peanut allergies than Hamas rockets. These adverts used in the USA and around the world use computer generated animation (CGI) to create false images that Israel uses in its never ending propaganda (hasbara) war.

Given that most Israelis are atheists and Israel now has more gay bars and brothels than synagogues, I sadly fail to see how Israel has the gall to reference it as the “holy land”.

For more information, on what YOU buy may be used to finance Israel’s murderous and oppressive activities, please visit the stop funding israel website.

The only man to have admitted his role in the killing of Malcolm X has been released from prison on parole.

Thomas Hagan, 69, was released from a New York jail 45 years after the assassination, officials confirmed.

Hagan was one of three men convicted of killing Malcolm X, The two other gunmen were previously paroled. Hagan, who was shot in the thigh while trying to flee, was arrested outside the Audubon carrying a clip from the .45 caliber pistol he used during the attack.

First-person accounts of the shooting were provided to investigators by a variety of witnesses, including a Queens man, William Parker, who was struck with a stray bullet, and Betty Shabazz, Malcolm’s wife, who testified before a Manhattan grand jury. An NYPD report details the results of an autopsy performed at the Bellevue Morgue: “Cause of death: Multiple shotgun and other caliber bullet wounds of Heart and aorta.”

Perhaps it’s time that the truth was laid bare, and the CIA admitted it’s role in the assassination of the shaheed Al-Hajj Malik Al-Shabaz.

It was only after returning from performing the Hajj in 1964, did the black nationalism of the NOI be replaced with the correct form of Islam. Malcolm X was close to agreeing a co-operative movement with the other great civil rights leader Martin Luther King.

The CIA were well aware of the impact that of the concerted platform these two heavyweights would forge in uniting the black & impoverished communities, and the threat it would pose to the “American Way”.

Gone but never forgotten, the example of brother Malik Al-Shabaz continues to inspire people around the world on the quest for truth, justice and love for their fellow man.

Nazi Nick Gets His Backside Handed To Him!

Nazi Nick Griffin had his proverbial backside handed to him on a silver platter on last night’s Question Time.

The Akh was pleased to see that not one of the panellists gave up an inch of ground when exposing Griffin for the vile, racist that he is. Even Sayeeda Warsi, of whom I’m no fan of (what was up with the huge poppy?) came up trumps.

He did try and throw the “We support Israel against Hamas” when asked about being a holocaust denier, thankfully no one bought that.

Interestingly the BNP website was down this morning, with a note stating “We have had to take our normal website offline”.

Wouldn’t it be nice if Nazi Nick and his adherents would all just go “offline” and let the decent people of Britain live together with some semblance of peace and unity.

If you missed it, you can watch here on the iplayer.

All I’m going to do is run through the press briefings and I’m glad to announce, that the British Media have come out unanimously in rightfully condemning the BNP for their abhorrent and repugnant ideological views.

The Times carries a half-page photograph of anti-fascist campaigners protesting outside BBC Television Centre before the show was recorded.

For that paper, Libby Purves writes of host David Dimbleby “only occasionally was it apparent that his flesh was creeping”; Matthew Parris remarks that “nobody dared try what, if it could have been done, would have been the most devastating tactic of all […]: to brush him aside as a small man, enlarged by the anger of his enemies”, and David Aaronovitch concludes :

he confided that he thought the BBC to be ‘part of a thoroughly unpleasant ultra-leftist establishment’, when voters know it best for Strictly Come Dancing. He showed himself to be, not so much a fearful Nazi, as kook.

The Guardian focuses on Mr Griffin’s denials with the headline “As protesters bay outside BBC, Griffin insists ‘I am not a Nazi'”. In an editorial column, the paper portrays the BBC as:

a ratings-hungry corporation [which] failed to defend the values embodied in its own equality policies; it confused ultra-relativism with a proper commitment to free speech.

The Daily Mail headlines its report “Bigot at Bay”.

“Jeered, scorned and ridiculed… but still BNP leader milks his moment in the spotlight,” the Mail says.

The paper says the “priceless air time” has left the BBC facing accusations of “publicity-seeking naivety” and Max Hastings regrets that “[a]s a history lesson, almost all the panel talked tosh.”

The Independent reports on the demonstrations under the headline “Griffin’s baptism of fire at the BBC”.

It says the BNP leader had to be smuggled in through a back door. Tom Sutcliffe reflects:

Was it an early Christmas present for the BNP, an audience member asked finally, as Peter Hain had charged? If it was it was one of those presents that requires you to adopt a fixed and unconvincing grin, and which falls apart in your hands even as the wrapping is coming off.

The Daily Telegraph has a photo of Mr Griffin surrounded by his minders as he arrived at the BBC.

It says the corporation was “under siege” after the BNP leader used his appearance to attack Muslims and homosexuals while defending the Ku Klux Klan.

It says the “controversial statements” were made in response to “intense questioning” by audience members from ethnic minorities. 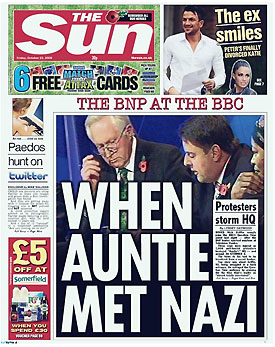 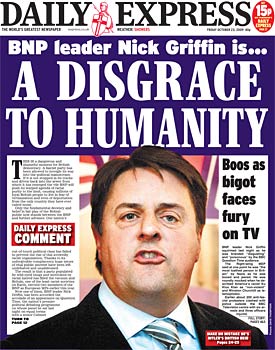 The Daily Express describes the appearance as a “dangerous and shameful moment” for British democracy, its editorial claiming :

Griffin has learnt plenty since his days as a National Front boot boy. He has coated himself with a fake veneer of respectability, becoming the purveyor of a sharp-suited, soft-focus form of fascism. 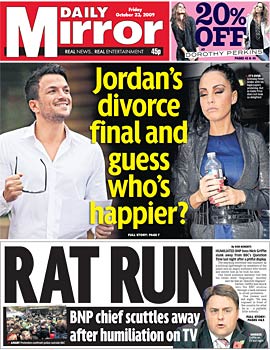 The Daily Mirror says Mr Griffin “slunk away” from the BBC after a “pitiful display” which exposed him as a political lightweight.

But in its leader column, it says “free speech should not include the right to spread hatred on national TV”. Political editor Kevin Maguire adds :

The logic of Thompson’s argument is Griffin will be invited on other programmes which feature other politicians. Putting Griffin on Question Time inflates his position. Last night the BNPer was deflated. Let’s leave it at that.

How Israel Supports The Slave Trade

Now that all the hype has settled over his grandstanding antics at the U.N. that overshadowed Muammar Qaddafi’s attempt to demand $7.77 trillion in reparations for the original holocaust, the African slave trade.

Naomi Klein’s cover story in Harper’s breaks down how Israel has stood in the way of black people getting reparations for the slave trade.

You can read the full article Minority death match – Jews, blacks, and the “post-racial” presidency here.

So what you really see here is the success of an extraordinary misinformation campaign that was launched in the aftermath of the first Durban conference to discredit a very important forum, because it was seen as potentially a threat to Israel.

Because it could potentially apply international law to Israel.

And it didn’t they would use any misinformation to discredit the gathering.

As Obama, prepares to meet Netanyahu and Abbas for a fresh round of peace talks, a recent poll in the Jerusalem Post suggests that just four per cent of Israelis believe the Obama administration supports their country. 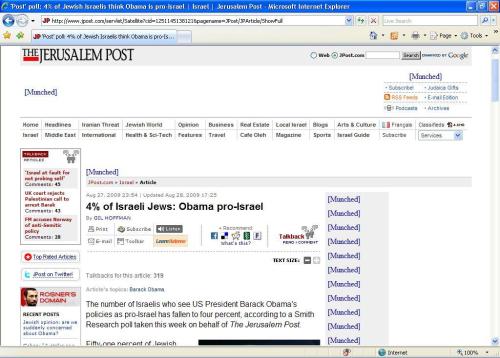 Watch the following report by Al-Jazeera where israeli’s yet again show their true hatred, with some even calling for Obama’s assassination.

There have been a few videos that have shown the true face of the israeli’s in recent time (remember – feeling the hate?) which goes to show that a country founded on racism is only going to produce people with a racist outlook.

Zionism is a racist ideology.

And yet the ‘West’ continues its unashamed support of the zionist state and continues to propagate the myth that we in the ‘west’ some how hold the same values and ideals that the morally corrupt and racist zionist state does.

Zionists are being trained to fight the hasbara campaign on behalf of the terrorist izzy state.

By having a pool of trained bloggers to fight the online war for them, the izzies are doing everything in their power to ensure they do not lose the PR battle next time they go about their murderous ways.

“Aimed at tackling challenges faced by Jewish bloggers both here and in the Diaspora, over 300 bloggers attended the Second International Jewish Bloggers Convention in Jerusalem at Beit Avi Chai on Sunday evening.

Although the convention attempted to help bloggers discover how to best make use of the Internet for promoting their cause, Tova Serkin of JGooders warned that “social media are not the ‘magic bullet,” and explained that while the Internet is indeed “the future,” it remains merely a tool that needs to be harnessed.

BNP Get Found Out

A classic clip from the ‘Real McCoy’

Why don’t the beeb make programmes like this anymore?